The regulations were proposed in December 2007 to codify an agreement that was unanimously approved on September 26, 2007 by the Parties to the 1954 U.S. Supreme Court Decree (Decree Parties) for operation of the three New York City (NYC) Delaware Basin reservoirs through May 31, 2011.

While no action to approve the Water Code amendments is scheduled for the December 10 public meeting, a discussion of future steps concerning the Water Code and a status report on the FFMP are on the agenda for the informal morning conference that precedes the Commission's afternoon business meeting. The conference session will begin at 10:30 a.m. at the DRBC's office building, located at 25 State Police Drive, in West Trenton, N.J. Both the morning session and the 1:30 p.m. business meeting are open to the public. In accordance with the Delaware River Basin Compact, the statute that created the Commission, the DRBC cannot take action except at a public meeting.

"After considering the 1,900 comments received during the public comment period and in consultation with the Decree Parties, the Commission is expected to withdraw the proposed regulations published on December 3, 2007 and to direct staff to develop new proposed amendments to the Water Code aimed at facilitating adaptive water resources management within a regulatory framework," Collier said.

The proposed new amendments to the Water Code, which will not be released before the summer of 2009, will provide for flexibility in addressing additional data and information as it becomes available from a variety of sources, including:

The Commission will conduct another full notice and comment rulemaking process, including a public hearing, on the proposed new Water Code amendments. The new amendments will contain standards for operation of the NYC Delaware Basin reservoirs but will be less prescriptive than previous proposals, which included detailed operational requirements. The amendments will allow for flexible, timely adjustments to reflect real-time conditions and new information, including the annual review of FFMP implementation, modeling simulations, and other sources. Such adjustments may include modifications to the release schedules to reflect climactic, river flow and temperature conditions, as well as short-term operating changes to accommodate maintenance and repair needs on a timely basis. The anticipated rule proposal will provide for public notice and comment with respect to any major modifications of the reservoir operating program.

The FFMP agreement reached by the Parties to the 1954 U.S. Supreme Court Decree (Delaware, New Jersey, Pennsylvania, New York State, and New York City) continues to be implemented on a temporary basis by the Decree Parties through May 2011 and can be viewed on the Delaware River Master’s web site at http://water.usgs.gov/osw/odrm/. The Decree Party's FFMP agreement was developed to provide a more adaptive means than the previous operating regime for managing the Cannonsville, Pepacton, and Neversink reservoirs for competing uses, including: water supply; drought management; flood mitigation; protection of the tailwaters fishery; a diverse array of habitat needs in the main stem river, estuary, and bay; recreation; and salinity repulsion. The 1954 Supreme Court Decree, which resolved an interstate water dispute centering on the three NYC reservoirs, made no provision for spill mitigation, conservation or ecological releases.

The conceptual framework of the FFMP agreement largely eliminates the reservoir storage "banks" previously used for habitat protection purposes and instead bases releases on storage levels, resulting in larger releases when water is abundant and smaller releases when storage is at or below normal. Its spill mitigation component is intended to reduce the likelihood that the three reservoirs could be full and spilling coincident with a major storm or thaw.

The law creating the DRBC gives the Commission the power to allocate the waters of the basin, but prohibits it from adversely affecting any condition set forth in the 1954 Decree, including the New York City reservoir releases or diversions that the Decree established, without the unanimous consent of the five Decree Parties.

The DRBC was formed by compact in 1961 through legislation signed into law by President John F. Kennedy and the governors of the four basin states with land draining to the Delaware River. The passage of this compact marked the first time in our nation’s history that the Federal Government and a group of states joined together as equal partners in a river basin planning, development, and regulatory agency.

Additional information can be found on the Commission's web site at www.drbc.net. 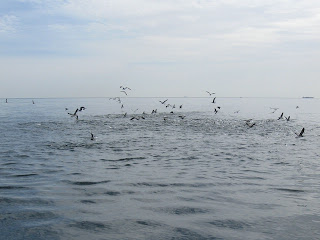 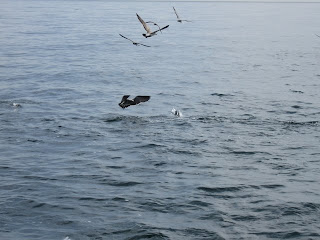 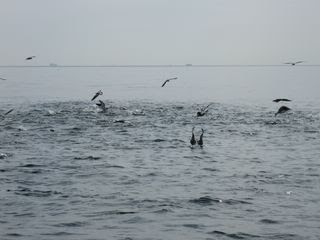 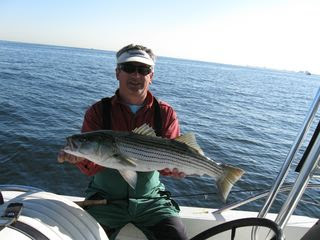 On the days that the wind cooperates we've been having some nice days fly fishing the New Jersey waters for striped bass. There have been lots of fish in the 24 to 27 inch range with some larger ones thrown in the mix. Most days we've been lucky enough to find surface action with the stripers. Big bluefish are also in the mix, with a couple up to 15lbs. landed on the fly rod.

Above is Dr. Bob Defilippis with a respectable 32 inch fall striper.

Pictured below is just one of a pair of doubles that Dr. Bob and Bruce Miller landed on November 4, 2008. 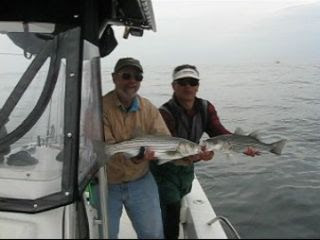