The water from the Upper Delaware River eventually makes its way down river where it mixes with the saltwater of the Delaware Bay. This lower river ecosystem is a spawning ground, nursery and migratory route for many different fish species.

Since 1991, the NJ Division of Fish and Wildlife has done trawl surveys in the Delaware estuary. This survey was meant to compliment another study done by the State of Delaware's Division of Fish & Wildlife.

Both the NJ Delaware Survey and the Delaware Bay Assessment by the State of Delaware are worthwhile reading.

Fishing the Upper Delaware in the Summer 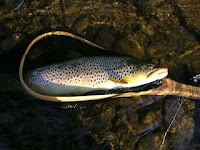 Summer opens opportunities to fish for big, selective West Branch wild brown trout either by wading or floating, determined by the water flows. A decent number of rainbow trout migrate from the Delaware River into the West Branch of the Delaware seeking colder water increasing the resident fish population. The Sulfur hatches can be incredible! Blue wing olives, isonychias, Cahills, tricos and caddis also make their famed appearances. Later in the summer terrestrials become added to the menu.

This time of year often means mid to late morning starts and wading in cold water, so appropriate gear is important. Wearing fleece under your waders on 90 degree days is normal. This isn't easy fishing, but on most days you will encounter large browns surface feeding. Light tippets and picky fish is what you should expect.

The upper East Branch turns into a spring creek like fishery with "far and fine" being the rule for the spooky browns that call the crystal clear waters home. Stealthy wading is a must. Then there's the Mainstem...

The Mainstem of the Delaware has become (actually, it has always been) an excellent smallmouth bass fishery. These guys are a blast on the fly as well as light tackle and inhabit some very beautiful and pristine sections of the river. The sections of the river I smallmouth fish have been ranked in the top five of smallmouth bass rivers in the US. It's a fun day of fishing with the occasional walleye or striped bass thrown in too.

I'm often asked what books I'd recommend about fishing the Upper Delaware and New York's Catskill streams & rivers. Here's a short list of some good reading covering the where, when and how.

Fly-Fishing Guide to the Upper Delaware River by Paul Weamer

Good Fishing in the Catskills by Jim Capossela

Fly Fishing the Beaverkill by Eric Peper and Gary LaFontaine

The information contained in the survey resulted from a total of approximately 20,000 completed questionnaires from a random sample of licensed anglers. The results indicate that anglers spent an estimated 18.7 million days fishing New York's freshwaters in 2007. This is a slight increase from 1996's estimate of 18.6 million, though lower than the 1988 peak of approximately 21 million. Water bodies that had significant increases in the number of angler trips in 2007 included Oneida Lake and the Hudson River -- each had a jump of approximately 200,000 additional angler days over 1996's estimates. Smaller increases were also noted for Lake Erie, Cayuga Lake and Lake Champlain. Lake Ontario remained the top fishing water, though there was a 177,000-angler-day decrease compared to 1996's estimates.

Black bass continues to be a top favorite among many anglers. Other species, including walleye, yellow perch, and bluegill/sunfish, all saw increases from 1996 levels in the number of days they were pursued by anglers.

"New York has some of the finest freshwater fishing in the country, with a wide range of angling opportunities that are the backbone of a substantial economic engine," Commissioner Grannis said. "The angler survey is an important tool that will help build upon our success in managing fisheries and create new fishing opportunities. We thank the many anglers that participated in providing this information and look forward to working together to protect, restore and enhance freshwater fishing in New York."

The survey was carried out by Cornell University's Department of Natural Resources in cooperation with DEC's Bureau of Fisheries and was funded by a federal "Sport Fish Restoration" grant.

Results of the survey are compiled in four reports:

Report 3 provides estimates of angler effort and expenditures by county.

Report 4 provides an assessment of recall bias by comparing the results of the two survey methodologies used in 2007. The report also provides an analysis of trends in fishing effort.

Each of the four reports, as well as a summary report that highlights significant findings, are available on the DEC website (as PDF documents). Questions pertaining to the survey can be directed to Shaun Keeler in the Bureau of Fisheries at (518) 402-8928.

What a Cool Fishing Season 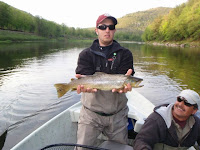 Fishing has remained good to excellent with some of the best summer hatches I've seen on the main stem in a long time. Stenos & Isonychias have been the bug du jour with fish on the duns and spinners.

With continued wet weather and higher flows than what we've seen in years, this spring like summer action could continue as long as the weather remains cool. This month's night temperatures have been in the forties to mid fifties, a definite help in keeping the water temperatures cool. The West & East Branches have also fished well with sulfur hatches in full swing.

Technical trout fishing on the Delaware and its branches gets seasoned with flat out fun light tackle and fly fishing for smallmouth bass further down river. This combination will continue into mid October along with the excitement of saltwater fishing that should go well into November. I'm really looking forward to the variety the rest of the season has to offer.