Fly Fishing is Only a Short Train Ride From NYC

"Bass fishermen watch Monday night football, drink beer, drive pickup trucks and prefer noisy women with big breasts. Trout fishermen watch MacNeil-Lehrer, drink white wine, drive foreign cars with passenger-side air bags and hardly think about women at all. This last characteristic may have something to do with the fact that trout fishermen spend most of the time immersed up to the thighs in ice-cold water."
- New Yorker Magazine, June 13, 1994
No comments:

Summer Strategies for the Delaware River

Sometime during the dead of winter or maybe really early in the spring, we start getting restless for the beginning of the season. I say “the season” because as trout anglers we all know exactly what we mean. There is no other season. Early stoneflies, blue quills, Hendicksons, March browns, green drakes, brown drakes, cornutas, sulphers, shad flies, apple caddis… you get the picture. Sweet!
The explosion of life that takes place right in front of our eyes during those first six weeks of each season is really impressive. Fishermen also seem to be hatching everywhere! Then late June arrives. Fewer anglers; the Glory Hatches are over... or are they?
When we enter the summer months the names of the bugs change, but the place remains the same. Now we need to change our tactics in order to be successful. Wild fish know enough to move into better habitat, call it their summer homes. They adjust their feeding activity to avoid predators and at the same time capitalize on the available food supply.
As a tailwater, the Delaware is supplied with cold clean water throughout the months when most other eastern trout fisheries are put on hold until the cooling days of autumn. True, sometimes we don’t receive the amount of water we’d like or sometimes even too much, if there is such a thing, but in any event, the fishing remains worthwhile if you match your efforts to the conditions.
Too often the lower reaches of the river become warm and unfishable. This includes much of the East Branch, Main Stem and the lower portions of the West Branch. Now it becomes time to do what the trout do; seek out colder water. This time of year your most important piece of equipment is a stream thermometer.
In our search for colder water and the fish that call it home, the best strategy is to get closer to the source. Moving up river until we find water in the low sixties and colder should do the trick. During severe heat waves and minimal reservoir releases, this is from approximately the New York State Line and higher on the West Branch, and often in the shadow of the dam on the East Branch.
Time of day is another important consideration. During no or little water release periods, the mornings and evenings are cooler, and the low light conditions make the trout feel a little more secure from predators. When the reservoir is releasing water, 500 CFS or more, everything changes. Insect activity increases and the higher flows and abundant food supply bring out the fish throughout the day.
Tackle selection and fly pattern style differ little from earlier in the season. A nine foot, four, five, or six weight still work fine. You may want to lean more towards the fours and fives and maybe a little softer tip to protect the lighter tippets. Spools of 5X, 6X, & 7X and an assortment of dry flies and nymphs take care of the terminal end.
A dry fly box stuffed with olives, sulfurs, caddis, Cahills, flying ants, beetles, tricos, isonychias, and spinners of the same will take care of the surface action. For subsurface, nymphs and wet flies you’ll want to have an assortment of bead head pheasant tails, regular pheasant tails, partridge and yellows, partridge and greens, isonychia nymphs, zug bugs, princes, and caddis pupa.
The best part about summertime fishing on the Delaware is that autumn fishing has yet to come. See you on the river… Cross Current Guide Service
Copyright 2005 Joe Demalderis 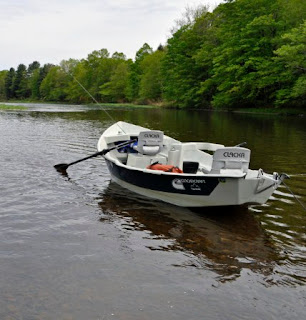 The first consideration is to ask, how would we want to be treated in the same situation? The second is plain old common sense. I’ll try to relate this to fishing situations so everyone can have a pleasant experience while on the water. A quick list of the unwritten “rules of the road” as they apply to waders and boaters, or maybe better said, waders vs. boaters!

Let’s start at the boat ramp. Often you won’t be alone in wanting to launch a boat. Other fishermen with drift boats, canoes, kayaks or pontoons will have the same idea as you. To keep everything running smoothly it’s important that everyone respect their place in line and their time on the ramp.

Have your boat rigged and loaded before you back down on the ramp. If you’re not ready and there are others waiting it’s okay to let them ahead of you. Get your boat in the water and then move it to the side so others can launch. If there’s current, the downstream side of the ramp is a better choice so as not to interfere with others as you start underway. When in doubt, ask someone.

Now you’re fishing, and low and behold, there’s a guy wading, now what? The best thing is to go behind him, causing minimum disturbance as you do. Don’t dip your oars unless it’s to maintain control of your boat. If the water is too shallow to float, quietly get out of the boat and as quiet as possible, walk your boat behind him. Do not fish the water as you go by. It’s just plain rude, and you’ll be down river soon enough to start fishing again. The wade fisherman always has the right of way.

Sometimes you have a situation where there isn’t enough room to go behind the other angler. There are several options here. First, if the section of river is wide enough, you can hug the opposite bank as long as you are well out of the water he’s fishing. Another option is to pass close to him on the center river side, but only after letting him know of your plan. If he objects, get out and drag the boat behind him. Wade fishermen are allowed to step back toward the bank to let a boat through so the boat doesn't disturb the water they're fishing, and most will in tight situations. There’s nothing wrong with friendly communication.

Okay, you got through that situation. Now you come upon another vessel ahead of you. If the other boat is anchored and obviously fishing toward the right, pass far on the left. The reverse is also true. If you can’t tell, or aren’t sure, just ask what side you can pass on. Always give as wide a berth as possible.

If the boat is underway and drift fishing, pass on the opposite side that they’re fishing, again giving as wide a berth as possible. The wide berth will keep you out of their back cast and you from getting hooked. Keep in mind that the vessel being overtaken always has the right of way. This is the law and has nothing to do with etiquette.

Once you pass the other boat, don't cut in front of him and start fishing. Go down river a long way, even to the next pool of riffle before you start fishing. If you wanted to fish that water you should have held your boat back and fished behind them.

Never jump in on anyone’s fish unless invited. Don’t even ask. Just go find some different fish. Don’t anchor in casting range of anyone else. Since you don’t know how far anyone can cast, assume it to be a fly line length. When you anchor, do it quietly and when it’s time to move on, leave quietly too. Never put down the fish you were fishing to. Let the next guy have a crack at them.

Be mindful of where you anchor. Sometimes you just need to stop, maybe for a rest or a bite to eat. When you do, you should notice where you are. Be careful not to block a narrow channel and make it difficult for others to get by.

All in all, it’s been a great day on the river. You landed some monster browns, netted some rainbows and even had a few “Kodak Moments” and nobody fell in. The sun’s getting low and you really don’t know the river that well. What should you do? Head for port!

Unless you have enough experience and have confidence in the dark, don’t stay out in the dark. If you do, make sure you have the required safety equipment with you, and yes, pontoon boats have the same requirements as other vessels. When you get to the boat ramp follow the same courtesies you did when you launched.

At night on the ramp avoid shining vehicle headlights or other bright lights upriver. This only serves to blind other operators and make navigation difficult. If you are shining a light upriver to help someone find the takeout, see the previous paragraph.

You may have to wait your turn to take out, and when your turn comes you should be ready. Once your boat is on your trailer, pull it up out of the way and then secure your tie down straps, put your tackle away, and take off your waders and anything else you need to get done. If you are waiting for a shuttle, let the next guy ahead of you.

All you need to do is remember to treat others the way you want to be treated. Unfortunately, you are bound to run across idiots, whether they be on foot or in a boat, and when you do, there’s no sense going crazy because you’re not going to ruin their day, only yours.

One of the most over looked game fish of the Upper Delaware River is the smallmouth bass. Yet, this rugged fighter loves to eat the bug at the end of your fly line or inhale a well presented lure cast from a spin rod or bait caster. They're at their best when the trout season often settles down providing great action all the way into the late fall. If You've done it before, you know what I mean. Learn more here.

Drift Boat Fishing for the Wild Trout of the Delaware River

Here is the best in drift boat fishing on the Delaware River System. Click here